I recently ordered two lenses for comparison since they overlap in focal range: the Canon EF 70-300 f/4-5.6L IS USM and the Canon EF 70-200 f/2.8L IS II USM.  I’m writing this post because I’ve seen quite a few reviews out there comparing the 70-200 2.8 or 4 against the older non-L 70-300 lenses, and hopefully this will help someone out as they make their purchasing decisions.

First, about the 70-300. I’d ordered it thinking that this was the only lens I should consider.  Some reviews of the 70-300 say it’s a fantastic lens, tack sharp, fast focusing, great focal length range, and easier to carry than the 70-200 2.8. Those are all true.  After shooting with it for a few days, I was starting to notice that the 5.6 aperture at the long end of the lens lead to some relatively high ISOs (3200) in even what seem like well lit rooms, such as indoors with indirect sunlight in a room that has large windows on three sides.  So, after some deliberation (and Canon’s recent instant rebate offer on the 70-200 f/2.8L II lens) I decided to order it as well and compare the two.

The 70-200 2.8 II arrived at my house, and I took it out of the box. This lens is larger and heavier than the 70-300L, not unexpectedly of course. The size and weight aren’t prohibitive, but if you’re not used to large lenses, it may come as a surprise.  I mounted it on my 7D and started shooting around the house.  I like the increased subject isolation and faster shutter speeds of the wider aperture lens, definitely.  As I shot more with them, I realized each lens is meant for different purposes even though they overlap in focal length. So, here’s my pros/cons list for these lenses.  Keep in mind that any issues are nit-picks since both lenses are worthy of their “L” series moniker.

Pros of both lenses:

Canon put enough competitive differentiation between the 70-300L lens and the others (70-200 f/2.8L II and f/4L) to justify its existence. Since it’s a tiny lens, I could see myself traveling light with this lens and my EF-S 17-55mm f/2.8 IS USM lens, covering the focal lengths of 17mm to 300mm, albeit with a small gap from 56-69mm and a variable aperture from 70mm upward.

Overall, if you need the capabilities and convenience that each lens offers and can get both lenses, go for it. If you have to choose one over the other, the major differentiators between the lenses are the weight, price, focal length difference, and aperture.  They really are lenses designed for different purposes, so whatever fits your needs best is what you’ll have to determine.  I’m going to use the 70-200 for indoor shots and 70-300 for outdoor shots and travel.  The 70-200 would be fine for travel if you don’t mind lugging around a huge white lens, but I’d rather have the smaller size of the 70-300 for travel. The 70-200 is useful when you need the wider aperture for whatever reason: subject isolation, faster shutter speed, etc., and don’t mind the extra weight and can live with the shorter focal length.

I plan to post some sample pictures from each lens in a future post, but here are pictures of the lenses in both retracted and fully extended positions.  (Click to enlarge each picture.)  These pictures were taken with a 24mm f/1.4L II lens. 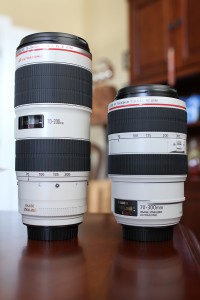 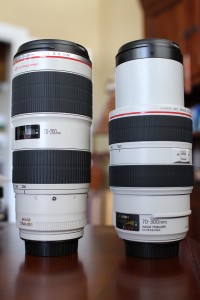